Q&A - Intergeneration Wealth Transfer
Q1 What is the inter-generation transfer of wealth?* 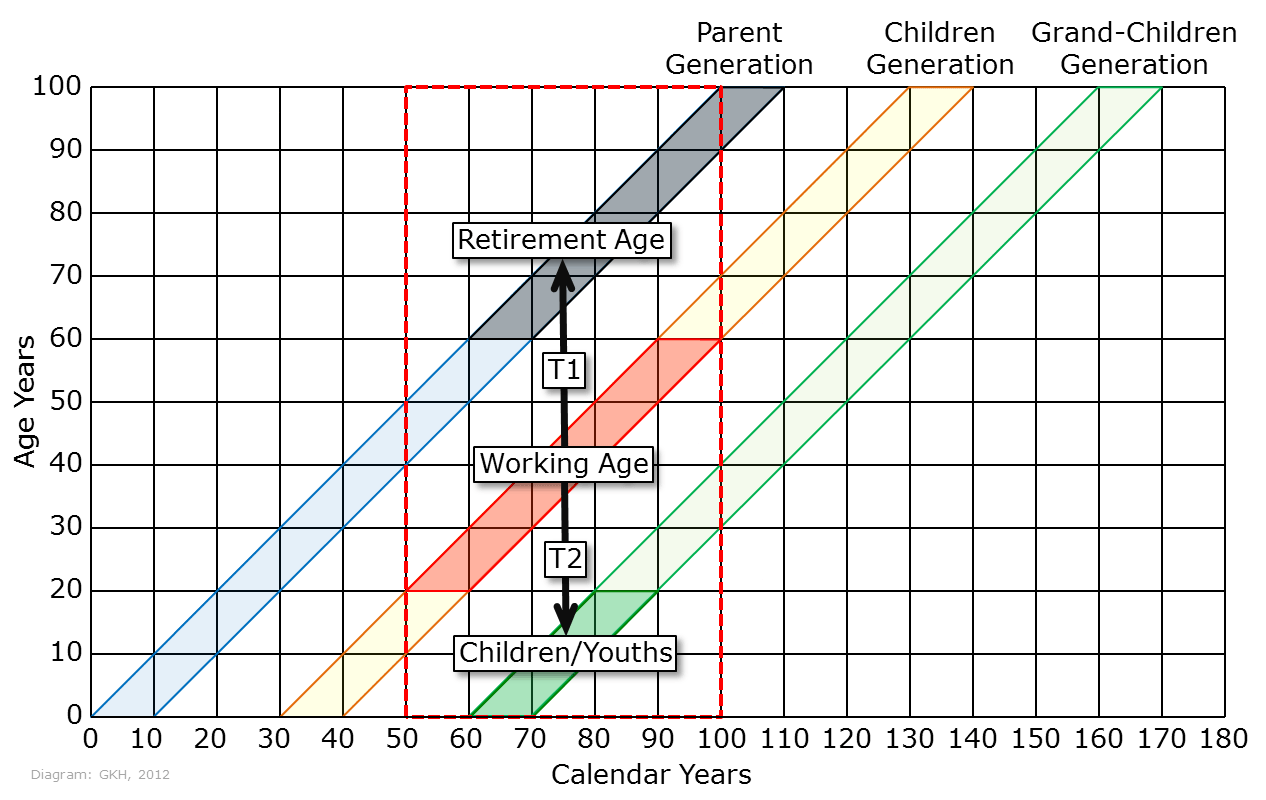 With the start of calendar year 50 the first members of the "children generation" enter working age (which we have defined as the age between age 20 and 59). In our model, for the next 10 years they can consume all their income - because their "parents" are not yet in retirement and their "children" are not yet born. But as soon as the first members of this generation had celebrated their 30th birthday they have to support both their "parents" and their newborn "children". For the next 20 years of their working life, they will have to support not only themselves, but also their dependent "children" and their retired "parents". Obviously, if the "parent generation" was very large, as was the case with the "baby boomers" in the mid-1950s and early-1960s, the children generation will have to shoulder a heavy burden. When the first members of the "children generation" reach age 50, the burden gets a bit lighter - because then their own children begin to enter their working-age. But they still have to provide for their "parents", who have just celebrated their 80th birthday - and may still live another 10 or more years in retirement.

The diagram explains a basic idea of inter-generation transfer of wealth: Members of a "working age" population usually has a double burden: they supports both their dependent children [T2] and their dependent "parents" [T1] who are in retirement age. Pay-as-you-go pension systems are based on this "generation contract", where each subsequent generation takes care of their retired parents and dependent children. The system can only work if the number of people in dependent age groups is not much larger than the number of people in working-age.

Economist typically argue that gains in productivity would allow working-age populations to support ever larger dependent populations. While this may be true to a certain extent, common sense suggests that there should be limits. If one person in working age has to support not only himself or herself, but perhaps three other people (one child and two people of retirement age) then this generation might feel exploited and might cancel the "generation contract" - either by having no children or by limiting support for older people. Such demographic conditions could easily trigger a "generation war" in which working-age population is increasingly unwilling to shoulder the burden.

Note: * The inter-generation transfer of wealth is a most relevant concept for any "pay-as-you-go" pension system. These are pension schemes where the children eventually pay the pensions of their parents.
Literature:
United Nations, Department of Economic and Social Affairs, Population Division (2013) Fertility levels and trends as assessed in the 2912 Revision of World Population Prospects. New York, ST/ESA/SER.A/349